Skip to content
By: LMAdmin Posted on March 5, 2020
Spread the love

Whales have been of great interest to human beings for a long time as have other sea mammals. Films have been written about them, documentaries on them and exploring their world but there is still so much about their life that we don’t understand. But one thing that is utilised in many spas and therapy rooms across the country, that use Music for Business is Whale song. The beautiful music that these magnificent creatures make is incredibly soothing and calming and used to help with relaxation.

One type of whale is that of the toothed whale.

Toothed Whales are originally descended from land mammals and have evolved a long beak on the front of the skull. This accommodates a row of even, cone shaped teeth used for catching fish.

In dark, murky waters, prey is searched out using a form of sonar echo-location. The apparatus for this is a chamber of fatty tissue, the bulge seen on the top of the whale’s head, which is filled with a mixture of waxes and oils. This acts like a lens to concentrate the clicks and squeaks they make, into a beam of sound that the whale can direct. Any reflected sound is picked up by a sensitive point in the tip of the jaw, and then down a channel into the whale’s ear.

Different types of echo can be identified by the whale to let it know if it has tracked down possible prey for food. Pilot and Sperm whales dive to levels in excess of 1,000 metres to catch large squid and octopus and rely solely on their sonar in these dark depths.

The biggest of the toothed species is the Sperm whale, it has a huge head which measures almost one-third of its entire body length. Seldom seen near land, it spends its life cruising the world’s oceans, mainly in the warmer climates. 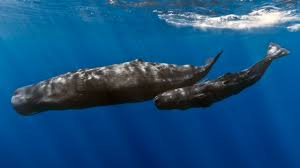 Pilot whales are also found in warm tropical waters and being a deep-sea species rarely approach land. They travel the high seas in large groups, sometimes hundreds of animals, whereas deep sheltered waters attract smaller family groups of 10 to 12. In the Northern Hemisphere, Pilot whales can be seen around the Canary Islands where the migrate to give birth.

Probably the most well known of the toothed whales is the Killer Whale or orca, which is easily identified by its large dorsal fin. They are superb hunters, and can adapt to most conditions, from the icy waters of the polar regions, to the hotter climates of the Equator. Sometimes found in river estuaries and other coastal regions, they are equally at home in deep water.